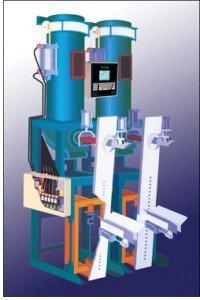 The Exxon Chemical Company Resins Finishing Plant in Baton Rouge, LA., produces large volumes of hydrocarbon resins, which are used as adhesives ingredients. High-pressure pumps at a site six miles away deliver a liquid containing 50 to 62 percent resin mixed with a diluent to the plant. The liquid flows through a six-inch pipeline to the plant’s holding tanks. The plant uses pressure, vacuum, heat, and steam to vaporize the diluent, which is moved to a holding tank and reused later. The resin goes to a heated storage tank and is either pelletized (and packed in 50 pound bags and 1,000 pound bulk containers) or bulk loaded into drums, tank trucks, or tank railcars.

The original packers that filled 50 pound bags of the sticky, hard-to-handle resin pellets used all-mechanical pneumatic fillers, each with a counterbalance weighing mechanism that tripped a pneumatic switch when a bag was full. The packers were rugged, easy to operate, and fast, but lacked the required fill-weight accuracy because they couldn’t compensate for changes in product density and flow characteristics. The packers’ moving parts were also susceptible to maintenance problems from resin dust buildup.

In packer operation, a worker manually controlled fill-weight accuracy by entering a bulk weight value and a dribble weight value and then guessing what the preact (preset cutoff point) would be. A Thompson Scale in-motion checkweigher rejected off-spec bags from the chemical company’s production line onto a reject conveyor. As time permitted, workers picked up rejected bags, placed them one by one on a floor scale, and manually corrected the fill weight. If the reject conveyor filled up, a worker had to stop the bag packers, move the bags, and stack them on the floor until later. These labor intensive actions slowed production. Also, the hydrocarbon resins and associated dust are tactifiers, which makes them sticky to handle. “This can cause big problems with handling equipment and makes maintenance challenging,” explained Frank Corbell, the plant’s day shift coordinator.

The plant’s IS0 9002 quality management program requires reliable equipment operation, mandating controlled and documented precision at all operating levels and manufacturing stages. One step in the program was bag packer automation. “Our customers require complete traceability,” Corbell said. “And any equipment we put in our line must be reliable and have few moving parts, which could be affected by the resin dust.”

To automate the bag packers, the chemical company evaluated several manufacturers’ electronic controller upgrades, including a Model 2657 controller upgrade from Thompson Scale, their filler equipment manufacturer. The unit has a simple design for easy maintenance and uses PC cards mounted in a cage within the controller for easy problem tracking. Each card oversees a specific packer function and can be replaced to solve a related problem. The upgrade’s solenoid valves are mounted in a single, dedicated enclosure and can be individually removed without disassembly. The upgrade’s operation and maintenance manuals are clearly worded and give enough detail for troubleshooting.

The chemical company reviewed the microprocessor-based upgrade and determined it could provide the required fill-weight accuracy. The upgrade also eliminated most of the original all-mechanical equipment’s moving parts (pivots, knife edges, and counterweights), reducing maintenance requirements. The chemical company chose the upgrade after extensive interviews and meetings with Thompson Scale’s engineers along with their local sales representative.

Thompson Scale’s engineers began the controller upgrade by removing all the existing pneumatic controls – a complex tangle of pneumatic valves and tubing running over the filler’s front and back. Workers replaced the old controls with a compact, NEMA 4X fiberglass enclosure containing the upgrade’s bank of high-volume, electronically controlled solenoid valves. Each solenoid valve was neatly piped to the bag packer, so the controller upgrade could directly actuate the valves and control all bag packer functions.

The controller upgrade replaced the original counterbalance weighing mechanism with a load cell that fits on the existing filler’s frame and attaches to the bag post that supports the filling tube and bag during fill. The upgrade senses load cell changes as the bag fills, which simplifies the weighing mechanism and provides linear measurements, so that a given weight placed anywhere from the top of the bag support post to the bottom of the bag chair (bag-support platform) weighs the same. Finally, the equipment manufacturer’s workers installed the packer controller. The controller gives internally calculated set points for product flow cutoff and permits simultaneous, independent operation of two filler spouts.

To initiate packer operation and for product and bag-weight changes, a packer operator runs a first cycle, which automatically gauges product flowrates. The controller then knows when to cut off product flow for an accurate fill weight. After the first cycle, the worker places one bag at a time on the spout, and the bag trips a sensor that closes a bag clamp and zeroes the scale. The controller detects the bag, initiates and completes the fill, then ejects the filled bag. The controller checkweighs each bag, stores the weight value, averages the error, and accordingly modifies the next fill time. The bag is finally conveyed to the palletizer, where it’s unitized, shrink-wrapped, and stored for later shipment.

The upgrade was completed three days after the equipment manufacturer’s workers arrived at the plant. System commissioning and testing caused no production delays, and the packers were operating within one week. Workers quickly became accustomed to the new controllers and no longer had to input a bulk value and a dribble value and then guess what the preact would be. Now a worker inputs the net fill weight and the controller takes over. The upgrade accommodates hourly or daily changes in material densities and flowrates.

The chemical company has encountered few upgrade problems. “A less complicated system means fewer moving parts to get sticky,” Corbell said. “There are fewer equipment problems, and when anything has come up, Thompson Scale and their local representative have worked well with us.” Of most importance to the chemical company’s management were consistent records of accurate performance. “Documented accuracy is extremely important,” Corbell said, “particularly when you are supplying a major component of a customer’s product. This system gives us all the information we need to back up our accuracy claims.”

Thompson Scale and Model 2657 Upgrade are trademarks of Thompson Scale Company. All other trademarks mentioned herein are the property of their respective owners. ©1994 Powder and Bulk Engineering